Slovenian Association for Gastroenterology and Hepatology 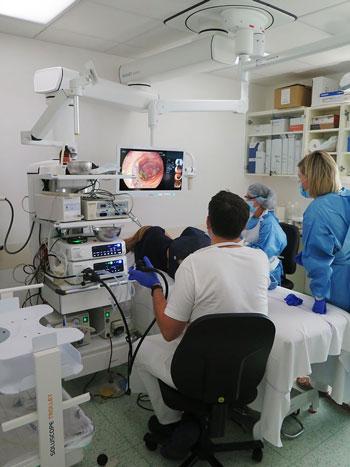 Board Members based on their function​

Recipients of honorary title from the SAGH​

History of our society​

The section for gastrointestinal diseases of the Slovenian Medical Association was founded in 1967 in Rogaška Slatina.

The first president was prof. dr. Jože Satler, the other prof. dr. Mitja Kovič. Afterwards the presidencies rotated troughout the hospitals in Slovenia.

In 1971, the GS SZD received its permanent residency in Rogaška Slatina.

In 1977, a committee was elected at the general election of the SZD section for GI diseases: prim. Andrej Lušicky, president, doc. dr. Jože Neudauer, secretary, dr. Branko Babič, treasurer; supervisory board: prim. dr. Mirko Drobnič, prim. dr. Oskar Končan and dr. Marjan Steinbach. The society had 90 members at that time. In the period from 1977 till 1980, 7 expert meetings were held.

From 1980–1985, the GS committee was: prof. dr. Herbert Zaveršnik, president, dr. Jože Kokovnik, secretary, dr. Bojan Glavnik, treasurer. Meetings were held twice a year, once in Rogaška Slatina (the latter was at the same time an intersection meeting of the General Assembly of the SZD and the Croatian Medical Association until 1990).

In the period from 1989-1995, the president of GS was prof. dr. Vladislav Pegan, secretary and dr. Jože Kokovnik.

In 1995, a new presidency was appointed: doc. dr. Saša Markovič, President, Prim. dr. Borut Kocijančič, vice president, prof. dr. Igor Križman, President of the Endoscopy Section, prof. dr. Eldar Gadžijev, President of the HPB Section. Dr. Miran Koželj was elected secretary, dr. Bojan Tepeš for treasurer, dr. Jože Kokovnik remained as the permanent secretary. At the spring meetings in Rogaška Slatina and at the autumn meetings in other cities of Slovenia, we began with systematic lectures on gastroenterology by adopting Slovenian guidelines for individual topic in gastroenterology and surgery.

In 1997, the first issue of ”Gastroenterolog” was published.

In 1999, at a meeting in Rogaška Slatina, the SZD section for GI diseases was renamed the Slovenian Association of Gastroenterology and Hepatology. A logo of the society was also created at that time

In 2000, the 1st Slovenian-Austrian-Croatian Gastroenterological Congress was held in Portorož, the second congress, which was also joined by Hungarians, was held in 2002 in Dubrovnik.

From 2021 onwards, the president of the association is prim. Milan Stefanovič.

Slovenian Association of
Gastroenterology and Hepatology

We use cookies to improve your experience on our site.
By entering our pages, you agree to cookies.